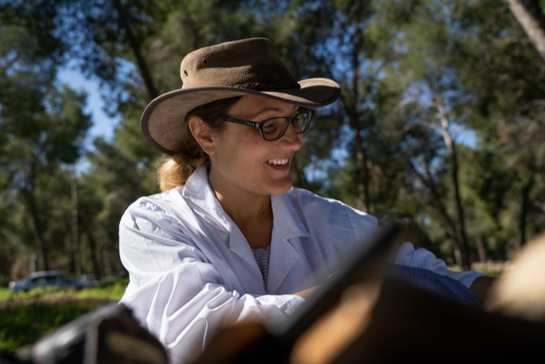 Dust of the Past: Forensic analysis of the sediments from the Iron Age houses in Khirbet el-Rai, Israel

The study of the chemical composition of the archaeological sediments is not a common practice during Bronze and Iron Age excavations in the Levant. To provide the proof of concept of the chemical analysis, we joined the 2019 and 2020 excavation seasons in Khirbet al-Ra‘i, located 4 km west of Tel Lachish and dated to the late twelfth to early eleventh century BCE. We used the 2019 season to test the sediments sampling methods in various archaeological contexts. We also examined the results of the field laboratory chemical analysis such as phosphates, carbonates, proteins, and fatty acids concepts. In 2020 we finalized the sedimentary sampling methods and established the laboratory for five parallel chemical tests.

The preliminary results suggest a variation in the chemical distribution in different areas of the Iron Age houses. The results suggest various repetitive activities performed in the distinct parts of the houses. We also developed an analytical chemistry fieldwork concept that allows us to produce same-day results of the sedimentary analysis. Our research shows the necessity of sedimentary chemical analysis work during archaeological excavations.

Sophia Aharonovich received her BSc in Biochemical Engineering in 2010 from Technion, Israel Institute of Technology. She then completed her MA at the University of Haifa, Israel, using pollen grains and phytoliths as proxy data for environmental reconstructions in the Middle Palaeolithic period. During her candidature, Sophia was involved in over 25 excavations in Israel, dealing with environmental and anthropogenic aspects of archaeological material from the Middle Palaeolithic to the time of the Crusaders. Sophia then came to Macquarie University to undertake her Ph.D. on global palaeoenvironmental reconstructions based on geological biomarkers during the Miocene Period (23–5 million years ago), which she completed in 2019.

Since 2019, Sophia has worked as a scientific archaeologist for the Khirbet el-Rai excavation project run by Macquarie University’s Ancient Israel Program in partnership with The Hebrew University of Jerusalem and the Israel Antiquities Authority. With the financial support of the Wakil family, Sophia developed a unique onsite laboratory for Macquarie University students to work on the analysis of organic residue, pollen, and phytoliths from the Iron Age site. In 2020, Sophia started a three-year Postdoctoral Research Fellowship in the Archaeology of Ancient Israel in the Department of History and Archaeology and the Centre of Ancient Cultural Heritage and Environment at Macquarie University, financially supported by the Education Heritage Foundation and later on by Sir Asher Joel Foundation.

If you aren’t on the NESS email list please click here to register your for the seminar series.