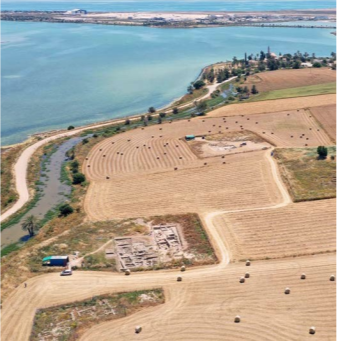 The Council of the Near Eastern Archaeology Foundation invite you to the J.B. Hennessy Memorial Lecture

The urban settlement of Hala Sultan Tekke is situated on the south-eastern littoral of Cyprus near the airport of Larnaca. Swedish excavations directed by Paul Åström began in the 1970s. In 2010, Peter Fischer restarted work on the project and has carried out 12 seasons of renewed excavations to date.

Recent large-scale geophysical survey work with magnetometers and geo-radar indicates the city is at least 25 hectares in size, with perhaps 15 hectares protected by a city wall and moat. East of the settled area, the survey indicated an area with numerous ‘pits’, which proved on investigation to be an extramural cemetery.

The new excavations in both the city and cemetery established a very high level of intercultural connections in the Late Bronze Age (ca. 1650– 1150 BCE), based on trade in copper and purple- dyed textiles. Most of the imported objects at the city came from the Mycenaean and Minoan world

Others arrived from Anatolia, the northern and southern Levant, Egypt and Mesopotamia. Even such a distant culture as the Nuragic civilisation of Sardinia is represented by table ware at the site.

Professor Peter Fischer is Senior Professor of Archaeology at the University of Gothenburg. After degrees in Mathematics, Law and Dentistry, Profes- sor Fischer turned to archaeology, reading his PhD in Archaeological Science in 1981. Professor Fischer spent many years on archaeological excavations in Greece, Jordan, Palestine and Cyprus, before lead- ing expeditions to Tell Abu Kharaz in Jordan (from 1989), Tell el Ajjul in the Gaza Strip (from 1999), and most recently continuing Professor Paul Astrom’s excavations at Hala Sultan Tekke (from 2010). Professor Fischer is the author of nine monographs and upwards of 200 research publications.