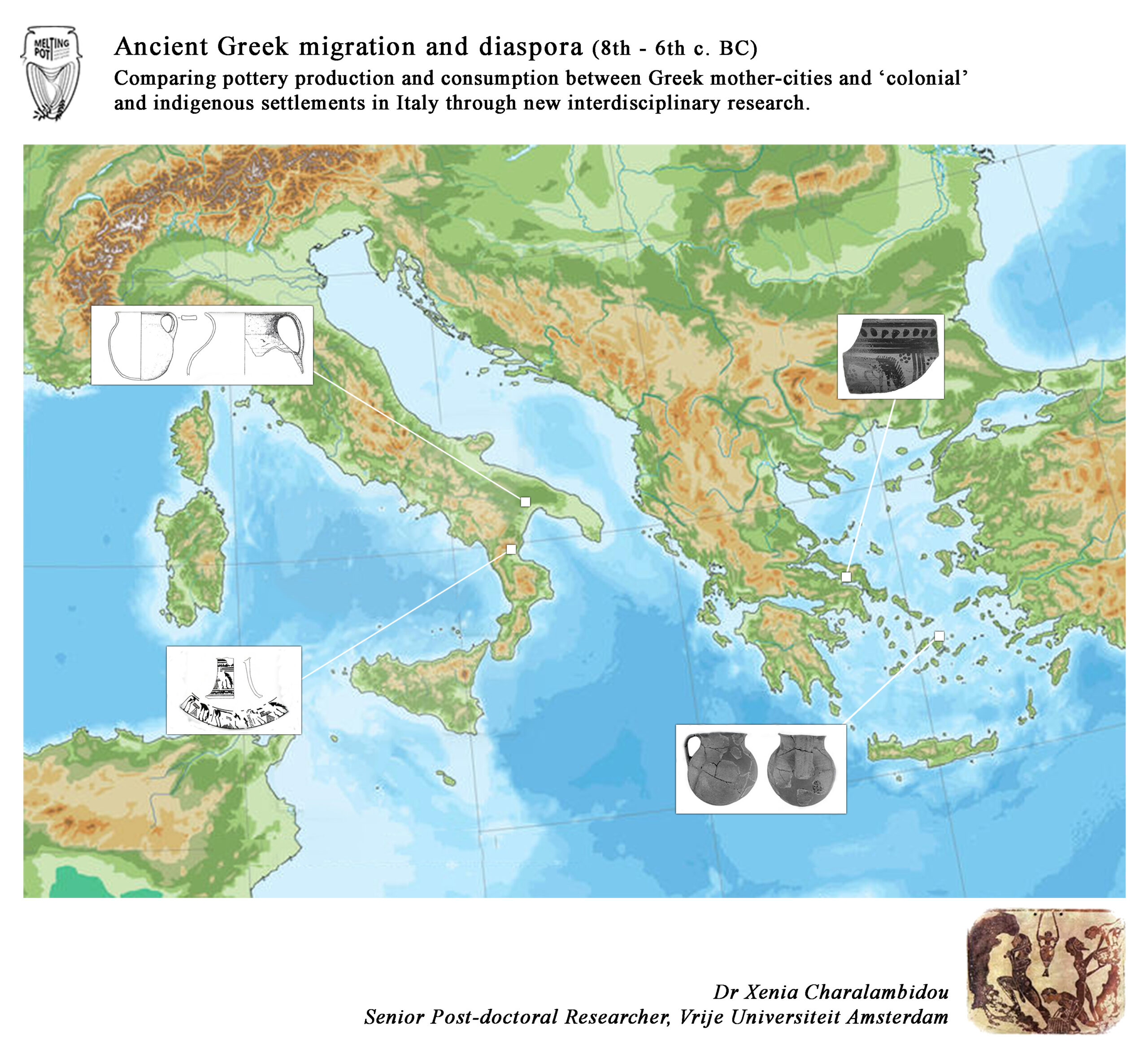 The essence of the research project “Pots and Pans: Pottery production and consumption as indicators for the contributions of Greek migrants and local inhabitants to the so-called Greek ‘colonization’ in Italy” is the comparison between pottery production and consumption of Greek mother-cities and that of ‘colonial’ establishments and indigenous settlements in Italy, to explore how knowledge, technology and consumption behaviour were transferred between Greece and Italy in the advent of and during the Iron Age Greek diaspora to Italy (8th-6th centuries BC). The purpose of this study is, therefore, to investigate to what extent Greek and native pottery traditions in Italy contributed to new emerging culture(s), and to the technology used to produce it, and how this aspect of material culture developed in the light of the formation of new identities and the development of new economic structures. This research is part of the wider project “What went into the melting pot? Land-use, agriculture, and craft production as indicators for the contributions of Greek migrants and local inhabitants to the so-called Greek ‘colonization’ in Italy (ca. 800-550 BC)”, funded by the Netherlands Organisation for Scientific Research (NWO) and directed by Professor Jan Paul Crielaard (Vrije University Amsterdam), which employs a transdisciplinary approach, combining new theoretical insights with scientific analyses of ancient craft-products, bioarchaeology, landscape-modelling and engagement in international scholarly collaboration.
This lecture first presents the questions and methodology of the “Pots and Pans” postdoctoral research, to comprehend the chaînes opératoires of ancient potters in mother-cities in Greece and in ‘colonial’ and indigenous sites in Italy, and the social dynamics and interactions of communities in contact. The presentation goes on to discuss the complexities of this topic: for example, the different degrees of linkage between Greek and Italian settlements as seen in the archaeological record, and how by comparing the material culture of ‘colonial’ and native settlements in Italy we can better appreciate the multi-directional networks that operated between Greece and Italy at that time. Currently she is also co-director (with V. Lambrinoudakis and A. Vlachopoulos) of the Metropolis (Grotta) Archaeological Project on Cycladic Naxos. Her publications include the co-edited volumes Interpreting the Seventh Century BC: Tradition and Innovation (2017; with C. Morgan) and Regional Stories towards a New Perception of the Early Greek World, Proceedings of the International Symposium in Honour of Professor Jan Bouzek (2017; with A. Mazarakis Ainian and A. Alexandridou), as well as articles/chapters in peer-reviewed journals and edited volumes. She is preparing (with J. P. Crielaard and C. Morgan) the co-edited volume Feasting with the Greeks: Towards a Social Archaeology of Ritual Consumption in the Greek World.

Registration is via Eventbrite